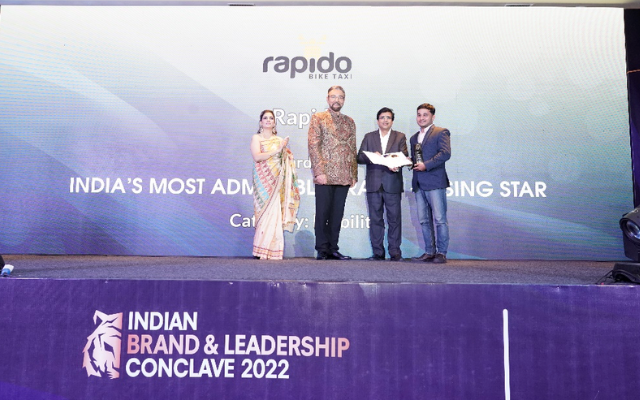 Rapido was recognized as India’s Most Admirable Rising Star at the Indian Brand and Leadership
Conclave 2022 organized by The Brand Story.

TBS Media – The Brand Story organised the Indian Brand and Leadership Conclave 2022, a congregation of India’s best brands to recognize those that have done remarkable work in their respective industry. The 2022 edition focused primarily on business leadership challenges and also recognized brands that overcame these challenges innovatively and inclusively. TBS Media – The Brand Story is one of India’s top brand rating companies that showcase the unique stories of brands that propel the country’s growth. Rapido was recognized as India’s Most Admirable Rising Star at the Indian Brand and Leadership Conclave 2022.

Rapido, legally known as Roppen Transportation Services Pvt. Ltd. is India’s largest bike taxi aggregator and logistics services provider. Headquartered in Bengaluru, the company has over 476 direct and 215 indirect employees. The brand’s strength lies in its commitment to serve people, leverage every situation, and turn every challenge into an opportunity. The brand managed to overcome the far-reaching impact of the pandemic by successfully turning the adverse situation to its advantage. The uniqueness of the brand lies in the product that it offers. The brand aims to make commuting easier for every commuter ensuring that they reach their destination on time. The concept of helping people beat traffic in cities and saving them from the crowd in public transport is the main goal of the brand.

Some of the human-centric traits that describe Rapido are Energetic, Young, and Smart. The brand proudly positions itself in making commuting easy and affordable. Witnessing a demand in the bike taxi segment, Rapido is now focusing on expansion. The brand is operating in more than 100 cities in India while focussing on Maharashtra and Kerala, which would cover Nagpur, Aurangabad, Nashik, Trivandrum, and Cochin. In these states, the tier-1 and tier 2 markets are unexplored. Rapido is looking at an aggressive expansion here, with the aim to venture into the untapped markets across the country.

Rapido has a wide user base of 20 million users and it is aiming to increase this number to 50+ million over the coming ten months. The current focus of Rapido is to expand operations across the country. The brand considers anyone looking for a comfortable and convenient intracity travel as a customer. As the idea of mobile-app based cab or bike hailing service has been limited to urban Indian cities, Rapido wants to spread this idea in tier 2 and tier 3 cities while making people realize the advantages of new-age technology.

Recently, Rapido also launched the ‘Smart ho, toh Rapido’ campaign featuring megastars Ranveer Singh and Allu Arjun. In these campaigns, the brand was positioned as a customer-centric entity offering customers multiple benefits. Rapido also deploys Ads and marketing campaigns on television and social media to make people across the country aware of its services. With a presence in more than 100 Indian cities, word of mouth also plays a strong branding factor for the brand. The ease of booking a ride through Rapido’s app makes the commute easier for everyone and the users know this. This USP helps Rapido reach more customers.

An evident sign of Rapido’s innovation is the brand’s ability to transform from a last-mile connectivity tool to an end-to-end travel platform. The brand has deployed advanced technologies to introduce models that serve its end-users and businesses in the post COVID world. The brand also has the first-mover advantage, as when it started, after 2 months both Uber and Ola and other players also began their bike-sharing operations. At that time there were more than 25 companies but now there are only a few left.

What sets Rapido apart is that the brand is only super-focused on two-wheelers; being the pioneer in this segment. The reliability of Rapido is far better than any other competitor. When it comes to the two-wheeler segment, the brand is far ahead of anyone else and at least three to four times ahead of the competitors. If we talk about entire ride-sharing, then the brand has more than 20% market share.

Rapido is the prime choice of commuters who wish to avoid the inconvenience of taking public transportation. The bike taxis of Rapido can quickly cut through the traffic to offer timely, comfortable, and cost-effective rides. The brand offers the highest satisfaction in the bike taxi category, which other competitors are unable to provide due to their poor & inefficient services and Long ETA problems. Apart from Rapido, users flirt most with Ola Bike App in the brand usage and performance category indicating leakages. An internal study has revealed that the highest customer satisfaction lies with Rapido in the two-wheeler bike taxi segment.

Dr Abhay Kaushik, Editor in Chief and Director, TBS Media – The Brand Story said, “Rapido is on its way to becoming the largest smart mobility solution in not just India but in the world as well. The way it has been a cost-effective commuting solution for the public is absolutely commendable. The brand has proven itself as purposeful to millions of users because of its amazing services.” TBS Media – The Brand Story is proud to honour Rapido as India’s Most Admirable Rising Star.

Amadeus invests in People Practices to Foster an Inclusive Culture